Peregrine was born in Forli, Italy, around 1265. At that time, Forli was governed by the Pope as part of the Papal States, and Peregrine grew up in a family that was actively involved in the opposition, or anti-papal party. Because of anti-papal activity, the city was under the church penalty of interdict, meaning that Mass and the Sacraments could not be celebrated there. St. Philip Benizi, Prior General of the Servants of Mary, went to Forli to preach reconciliation. Young Peregrine, very intense in his political fervour, not only heckled Philip during his preaching, but, in fact, struck him. Philip, instead of responding with anger and violence to the attack, turned and forgave Peregrine.

This encounter with Philip is said to have dramatically changed Peregrine. He began channelling his energy into good works and eventually joined the Servants of Mary in Siena, Italy. He returned to Forli, where he spent the rest of his life, dedicating himself to the sick, the poor, and those on the fringes of society. He also imposed on himself the penance of standing whenever it was not necessary to sit. This led to varicose veins, which later deteriorated into an open sore on his leg, and was eventually diagnosed as cancer.

Peregrine’s leg wound became so serious that the local surgeon decided to amputate the leg. The night before the surgery, Peregrine prayed before the image of the crucified Christ, and when he awoke, the wound was healed and his leg saved. He lived another 20 years, dying on May 1, 1345, and the age of about 80. Peregrine was canonized on December 27, 1726, and has been named the Patron Saint of those suffering from cancer. 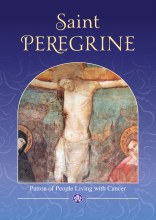 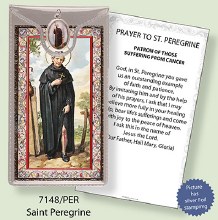 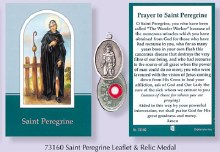 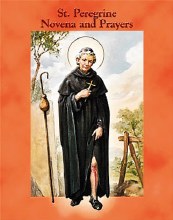 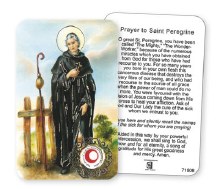