OUR RETAIL STORES REMAIN CLOSED UNTIL FURTHER NOTICE HOWEVER OUR ONLINE STORE IS OPEN FOR BUSINESS.

OUR RANGE MAY BE MORE LIMITED DUE TO SUPPLY CHAIN RESTRICTIONS. FREE DELIVERY FOR ORDERS OVER €20.00!

OUR RETAIL STORES REMAIN CLOSED UNTIL FURTHER NOTICE HOWEVER OUR ONLINE STORE IS OPEN FOR BUSINESS.

OUR RANGE MAY BE MORE LIMITED DUE TO SUPPLY CHAIN RESTRICTIONS. FREE DELIVERY FOR ORDERS OVER €20.00! 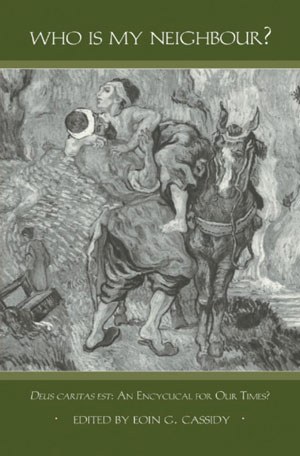 Look Inside Who is my Neighbour?

This product has not yet been reviewed.

Please login or register to write a review for this product.

Free – When you spend over €20.00 on any individual order

Note: Subject to placing your order before 12:30pm. Does not apply to pre-ordered items.

Note: We will contact you when your item(s) are ready for collection. Please do not visit your branch until you receive contact from us that your items are available to collect.

Note: Subject to placing your order before 12:30pm.

*Note: we do not deliver to Channel Islands or the Isle of Man.

Note: Subject to placing your order before 12:30pm.

Who is my Neighbour?

In February 2008, the Irish Commission for Justice and Social Affairs (ICJSA) hosted a conference in Dublin on the Encyclical letter of Pope Benedict XVI, Deus caritas est, entitled Who is my Neighbour? This publication includes papers delivered at the conference, as well as others commissioned with a view to highlighting the important contribution which the Encyclical makes in promoting the Gospel message in an increasingly secular world.

An array of contributors address the outwardly simple yet most perplexing question, `Who is my neighbour?; each bringing to the subject their individual and insightful perspectives. Exploring themes such as justice, human rights and education, among others, this book sheds a new light on the influential Encyclical that is Deus caritas est.

Bishop Raymond Field is Auxiliary Bishop of Dublin. He was ordained to the priesthood in 1970 and was ordained Titular Bishop of ArdMór and Auxiliary Bishop of Dublin in September 1997. Bishop Field is a member of the Department of Social Issues and International Affairs of the Bishops Conference, Chairman of the Irish Commission for Justice and Social Affairs (ICJSA) and a member of the Catholic Healthcare Commission. Bishop Field is a member of the National Executive of ACCORD and the Bishops Commission on Health care/Disability/Drugs. He is also President of Pax Christi in Ireland.

Eoin G. Cassidy is a priest of the Dublin Archdiocese and is head of the Philosophy Department at the Mater Dei Institute, Dublin City University. He is chair of the international sub-committee of the ICJSA. His most recent publications include: The Common Good in an Unequal World (Dublin: Veritas, 2007) and Community, Constitution and Ethos: Democratic Values and Citizenship in the Face of Globalization (Dublin: Otior Press, 2008).

Cardinal Seán Brady is Archbishop of Armagh and Primate of All Ireland. He was ordained to the priesthood in 1964. In 1980 he was appointed Vice-Rector of the Irish College, Rome, and in 1987 became Rector of the College, a post he held until 1993, when he returned to Ireland to become parish priest of Castletara, Co. Cavan. In February 1985 he was ordained Coadjutor Archbishop of Armagh and, on the retirement of Cardinal Cahal B. Daly, succeeded as Archbishop of Armagh and Primate of All Ireland on 1 October 1996. He was created Cardinal by Pope Benedict XVI at a consistory in Rome on 24 November 2007. Cardinal Brady is President of the Irish Bishops Conference, a member of its Department of Planning and Communications and a Trustee of Trócaire.

Archbishop Diarmuid Martin is Archbishop of Dublin and Primate of Ireland. He was ordained to the priesthood in 1969. He entered the service of the Holy See in 1976 in the Pontifical Council for Family. In 1986 he was appointed Under-Secretary of the Pontifical Council for Justice and Peace and in 1994 Secretary of the same Pontifical Council. In December 1998 he was appointed Titular Bishop of Glendalough and received the Episcopal ordination on 6 January 1999. In March 2001 he was elevated to the rank of Archbishop and undertook responsibilities as Permanent Observer of the Holy See in Geneva at the United Nations Office and Specialised Agencies and at the World Trade Organisation. He was appointed Coadjutor Archbishop of Dublin in May 2003 and was installed as Archbishop of Dublin on 26 April 2004. Archbishop Martin is Vice-President of the Irish Bishops Conference, Chairman of its Department of Social Issues and International Affairs and a Trustee of Trócaire.

Catherine Prendergast, DC, is a Daughter of Charity of St Vincent de Paul. She is currently Provincial of the Irish Province. Prior to this appointment, she lived and worked for twenty-seven years in the north inner city in Dublin. Her background is in Social Science and Apostolic Spirituality. Catherine worked with the Dublin Diocesan Social Services. In this ministry she was involved in influencing social policy and advocacy in the direct service of people in Centre Care at the Pro-Cathedral. Subsequently, she worked in the Daughters of Charity Service in Henrietta Street, creating opportunities for second chance education for those who have been excluded from mainstream education.

Bishop Donal Murray is Bishop of Limerick. He was ordained to the priesthood in May 1966. He was appointed as Auxiliary Bishop of Dublin in April 1982. He was installed as Bishop of Limerick on 24 March 1996. He is a member of the Pontifical Council for Culture, Chairman of the Irish Bishops Conference Department of Catholic Education and Formation, and Chairman of their Commission on Bioethics. Bishop Murray is a member of the Irish Bishops Conferences Doctrine Commission, the Commission on Europe and the Commission for Faith and Culture. He is also a member of the Strategic Task Group on Education and a Trustee of Trócaire. Bishop Murray is a noted author and theologian.

Professor Conor Gearty was educated at Castleknock College, Dublin, and afterwards at UCD and Cambridge University. He has taught law and human rights at Cambridge, Kings College, London, and the London School of Economics and Political Science (LSE). He is currently Professor of Human Rights Law and Director of the Centre for the Study of Human Rights at LSE. His publications include: Civil Liberties (2007), Can Human Rights Survive? (2006) and Principles of Human Rights Adjudication (2004). His most recent book is Essays on Human Rights and Terrorism, published by Cameron May.

Dr Fergus OFerrall is Director of the Adelaide Hospital Society, an Irish non-profit healthcare organisation founded in 1839. He holds a part-time position as Lecturer in Health Services Management in the Department of Public Health and Primary Care, Faculty of Health Sciences, Trinity College, Dublin. He is a member of the National Economic and Social Forum and was a member of its Project Team, which produced the Forum Report, The Policy Implications of Social Capital, published in October 2003. He has led the co-ordination of the Irish non-profit healthcare organisations through the establishment in 2002 of TheHealth Spoke, representing 400 such organisations in Ireland within The Wheel, the co-ordinating body of the non-profit sector in Ireland.

Gerry OHanlon, SJ, is Acting Director of the Jesuit Centre for Faith and Justice and Associate Professor of Systematic Theology at the Milltown Institute. He has published extensively, including an academic study of theologian Hans Urs von Balthasar and, with others, several booklets on social theology. His latest publication is The Recession and God: Reading the Signs of the Times (2009). Ethna Regan, CHF, is a Holy Faith Sister and Lecturer in Theology at the Mater Dei Institute. She was previously Lecturer in Theology and Ethics at the University of the West Indies. As Chairperson of the Credo Foundation for Justice in Port of Spain, Trinidad, where she lived for ten years, she was involved in social justice issues and the campaign for the abolition of the death penalty in the Caribbean. She also worked for five years in Samoa in the Pacific Islands. She studied at the Mater Dei Institute in Dublin, Fordham University in New York, and holds a Ph.D. from the University of Cambridge. She has written on liberation theology, Catholic social teaching, theological anthropology and is the author of Theology and the Boundary Discourse of Human Rights (forthcoming from Georgetown University Press).

Fr Paul Taylor, KCHS, born in Dublin and educated at OConnell CBS, holds a BA(Hons) from UCD. He was ordained by Pope Paul VI on 29 June 1975 in Rome. He received an STL from the Gregorian University, Rome, in 1977 and taught Moral Theology from1977, 1988 at Mater Dei Institute and University College Dublin (Diploma in Catechetics Course).He has worked in parishes in Dublin and Melbourne, Australia, and at present serves in the parish of Celbridge, Co. Kildare.

Bishop Donal McKeown is a native of Randalstown, Co. Antrim, and was ordained as a priest for the Diocese of Down and Connor in 1977.He spent twenty-three years teaching in diocesan colleges and in 2001was ordained Titular Bishop of Killossy and Auxiliary to the Bishop of Down and Connor. He is a long-term member of Pax Christi and has maintained a substantial involvement in educational issues, nationally and internationally.

Joan Roddy, DMJ, has been Director of the Refugee and Migrant Project since it was set up by the Irish Bishops Conference in 1999. Prior to that, she was involved with her Congregation in several African countries, including Ghana where, for eight years, she was part of a community development team. She also worked for almost a decade with the Kilkenny Social Services.
Availability: 1 in stock
€16.95
Qty:
ADD TO CART

Add to Wishlist
Who is my Neighbour?